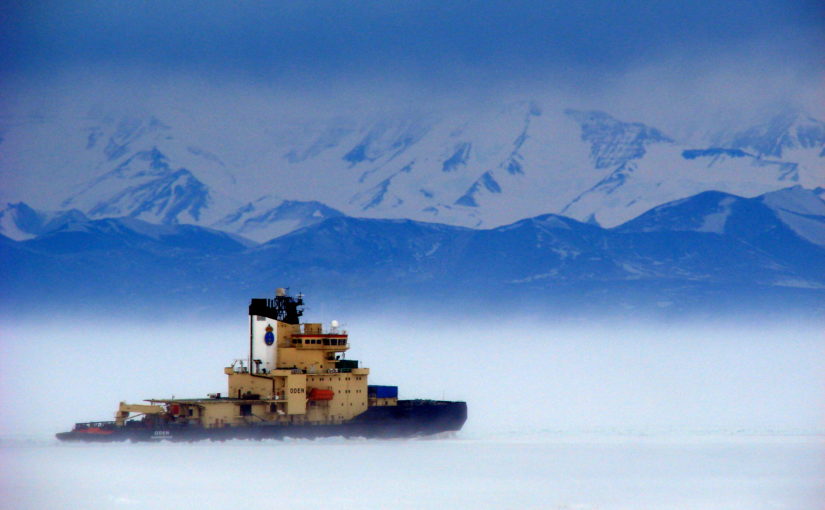 The Polar Museums Network held a workshop on 1 April 2019 in Ushuaia, Argentina. This provided an opportunity for museum and related academic colleagues to report on developments in their museums and discuss the future endeavours of the Polar Museums Network. Following the workshop, there was a social event for attendees. The generosity of the Museum Marítimo y del Presidio in hosting the workshop and hospitality is gratefully acknowledged.

Polar academics and museum practitioners attended this productive workshop to discuss two issues: how do academics engage with museums to enhance scholarly research, and how do museums engage with academics to enhance their exhibitions, education and outreach programmes?

The workshop concluded with a tour of the Museo Marítimo y del Presidio de Ushuaia, led by Director Carlos Pedro Vairo, and a social event at which Contralmirante Eduardo Traina, Comamdante Area Naval Austral welcomed the workshop participants and spoke about the important role the museum had in Ushuaia, and for visitors from around the world.

The Polar Museum Network has a JISCMail email discussion group you can join:
https://www.jiscmail.ac.uk/cgi-bin/webadmin?SUBED1=PMN&A=1.
Academics and museum practitioners are encouraged to share their ideas and proposals through this forum.

In Ushuaia, being the main port of entrance for cruises and expeditions to Antarctica and the home of this Museum, we were faced with the problem of communication with visitors. They are foreigners, locals, and Latin Americans. These three groups differ greatly in background. Therefore, research conducted by the Museum on Whaling Settlements on the Antarctic Peninsula is rendered for visitors as follows:

Summing up, we are faced with the challenge of staying up to date with new technologies in order to reach a wider audience, focusing on teenage motivation.

This presentation reviewed the museological reconstruction project of the Moneta House (MSH/HSM 42) at the Orcadas Base. In January 1905, the house, a prefabricated wooden structure, was assembled in Antartida as an operational science base with accommodation. The house is named in honour of José Manuel Moneta, a leading Argentine Antarctic pioneer.

In 2000, professionals of the Museo Naval de la Nación began a project to transform Moneta House into a museum, presenting it as it was in the 1920s: re-decorating a bedroom, the kitchen, and the living and working room. A historical exhibition was installed to show the conditions of daily life in this, the oldest permanent scientific human settlement in Antartida, with 115 years of continuous Argentine meteorological, glaciological, geodetic, and biogeographic scientific observations. Annually, Orcadas Base and Moneta House are visited by approximately 2,500 tourists from all over the world. Moneta House and museum are also instructive and inspirational for the base’s scientific and support personnel.

In addition, the Antarctic exhibition at the Museo Naval de la Nación, Tigre, in continental Argentina, promotes public understanding of the scientific activities and the operational logistics of Argentina in Antartida. Personal objects and images from Nordensoköld’s and Bruce’s historic expeditions, and current Argentine Antarctic equipment and clothing are exhibited. Presentations on this heritage are made at conferences and in workshops, and to the general public with special celebrations on 22 February, Argentina’s Antartida Day. Hobart’s historical connections to Antarctica and the ways in which these links are materially manifested throughout the city. Indigenous Tasmanians have a relationship with the far southern region that stretches back tens of thousands of years, as acknowledged in the name of the new icebreaker Nuyina – the palawa-kani word for the aurora australis. European connections date from the late eighteenth century and include well-known expeditions such as those led by James Ross, Jules Dumont d’Urville, Douglas Mawson and Roald Amundsen, as well as many sealers and whalers who operated out of the port in the nineteenth century. These connections are evident in the city largely in the form of memorials, statues and built infrastructure, which are themselves a tourist attraction. The self-guided walk/drive tour ‘Polar Pathways’ takes interested visitors to over thirty different relevant sites in and around the city, from the obvious to the obscure. Hobart houses several important collections and displays of artefacts and documents, with the Tasmanian Museum and Art Gallery featuring a permanent Antarctic exhibit, “Islands to Ice.” A significant newcomer is the Mawson’s Huts Replica Museum. Opened in 2013, the museum is a full-scale replica of the hut of the Australian Antarctic Expedition (1911-14) led by Mawson. The Replica attracts around seventy per cent of its visitors from the Australian mainland, and ten per cent more from international locations. Another recent development is the biennial Australian Antarctic Festival.

According to a survey conducted by the Australian Research Council funded project “Antarctic Cities,” Hobartians feel reasonably well served by museums and similar institutions, with around sixty per cent of those surveyed agreeing that the city has enough cultural infrastructure supporting engagement with Antarctica.

The Antarctic National Museum was established as a consortium of three Universities (Genoa, Siena, Trieste) in 1996 with a two-fold objective: to exploit Italian research activity carried out in Antarctica and to enhance and rekindle a historical awareness both of international and Italian Polar expeditions. In addition, the museum promotes the spread and the popularization of the Italian scientific results, as well as training in the polar sciences field at various levels.

The Trieste Section, inaugurated in 2004, is divided into two sectors:

1. A permanent exhibition that houses:

2. Sorting Center: Trieste is the national site for the collection of that geological-marine material sampled in Antarctic and Magellan marine areas (stored in cold rooms 4°C) during the Italian PNRA Expeditions since the early 1990s.

Since the Polar Museums Network’s inaugural meeting in Oslo, 2016, the situation in South Africa has not changed. But there are a few people working to get material and artefacts preserved and this needs mentioning:

From a South African perspective, it was also great that three of us could attend the PMN meeting. Ria Olivier, principal investigator and digital archivist and Anché Louw, science communicator of the Antarctic Legacy of South Africa and Charne Lavery of the Ocean Humanities project. We have just been appointed on the South Africa national committee for SCAR for Humanities and Social Sciences The Scott Polar Research Institute’s (SPRI) Centenary occurs in 2020, and planning is underway for a series of events and related exhibitions. This coincides with the bicentenary of the first sightings of Antarctica. The Polar Museum is endeavouring to reach new audiences and making sure that different types of people are represented in the museum. The Bridging Binaries LGBTQ+ tours have been very successful. A strong focus of the museum’s endeavours is to ensure that indigenous people are well represented in Arctic exhibitions and displays. Climate Change is also a key area of work, and the museum is working with a group of young people over the summer to co-curate an exhibition about climate change and the polar regions.

The history of the SPRI and radio echo-sounding (RES), from the early-1960s until the mid-1980s is being examined with a review of its related material culture, archival material, data and imagery. Oral histories by a range of RES technicians, scientists, data analysists and related cartographers are being recorded. In addition to personal memories and anecdotes, information on the technical terminology and operation of the electronic equipment is being recorded. The project has one over-arching aim; in the future, scientists, historians and curators will be able to understand this RES related historical material in the SPRI collections and its significance. Michael Gorman, an electronics engineer with a SPRI MKIV RES radar and timing unit that he operated in Antarctica in 1971/72 to measure ice thickness.